In the film, Madison is paralyzed by shocking visions of grisly murders, and her torment worsens as she discovers that these waking dreams are in fact terrifying realities.

Will premiere in theaters and on HBO Max on the same day as part of a new deal the studio has for 2021 that will apply to many of their big films that will be released through the year. While the films will be available on HBO Max and theaters on the same date, they will only remain on HBO Max for 31 days then they will be removed from the platform and only be available in theaters until they naturally run their course. There's no word when they will reappear on HBO Max.
Originally had an August 14th, 2020 theatrical release.
Director James Wan was quoted saying: "I’m super excited for this film. I don’t even know how to describe it. I wanted to do something original and genre-bending, and different to my other work, but still in the spirit of the horror-thrillers I grew up with."
Filmed in LA.
This is rumored to be part of the Giallo subgenre. (9/24/19)
There's a rumor floating around that the movie has something to do with a couple women on the run from some sort of monster. This is just an unconfirmed rumor at the moment. (8/23/19)
Not much is known about this movie aside from it being an original horror idea from James Wan. Here's what Wan recently said about the project: "I’m super excited to go back to my indie roots with this hard-R thriller. An original horror idea (not a reboot/remake or anything based on existing IP) with old school, practical effects and no giant, blue screen sets. That’s all I’ll say for now." (8/5/19)
James Wan co-writes with fiancé Ingrid Bisu, who is a Romanian-German actress that recently played "Sister Oana" in The Nun.
It's said that James Wan (Saw, Insidious, The Conjuring) is going back to his lower-budgeted horror roots with this film.
Warner Bros/New Line will release Malignant in theaters and on HBO Max on September 10th, 2021. 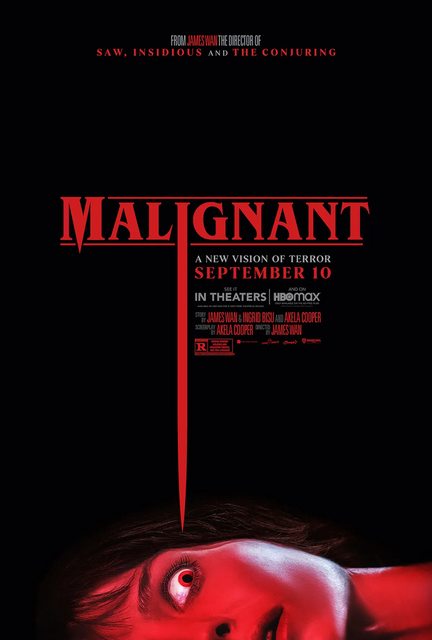 This year every Warner Bros. Pictures movie will be in theaters and streaming exclusively on HBO Max.

The biggest premieres every single month.