It rains heavily in Montevideo on a Sunday in 1993. A particularly suspicious man enters the last screening of a horror film at a downtown cinema. The room, which is not very crowded due to the storm outside, slowly starts to get stained with blood. Ana, the projectionist’s daughter, who has taken her father’s place just for the night, is in charge of the show. In the darkness of the cinema, the spectators fall one by one into the hands of the killer. From the projection room, Ana begins to notice that something strange is happening. A teenager and a boy who slipped into the room meet Ana as they try to escape. Together they must face this sadistic and ruthless killer, to save their lives and avoid a massacre in the matinee.

Dark Star Pictures and Bloody Disgusting have teamed up to release the film in the US. It'll receive a limited theatrical release this Summer, followed by a VOD release sometime in August. (4/23/21)
Also known as Red Screening.
This is a Uruguayan horror film that's heavily influenced by classic Italian Giallos from the 70s and 80s.
Dark Star Pictures and Bloody Disgusting will release The Last Matinee in theaters on August 6th, 2021 and on VOD platforms on August 24th, 2021. 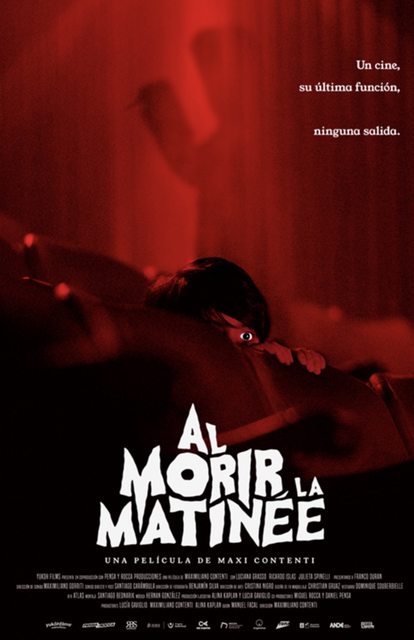