Finney Shaw, a shy but clever 13-year-old boy, is abducted by a sadistic killer and trapped in a soundproof basement where screaming is of little use. When a disconnected phone on the wall begins to ring, Finney discovers that he can hear the voices of the killer’s previous victims. And they are dead set on making sure that what happened to them doesn’t happen to Finney.

Previously had a January 28, 2022 theatrical release.
According to Ethan Hawke, producer Jason Blum once referred to Sinister as the "scariest movie he's ever worked on," but now this movie has reportedly taken on that title.
This project reunites the key cast and crew from 2012's Sinister, including director Scott Derrickson and co-writer C. Robert Cargill, along with actors Ethan Hawke and James Ransone.
Based on the short story by Joe Hill.
The Black Phone will arrive in theaters on February 4, 2022.

‘The Black Phone’ Hit With A Minor Delay
Horror Fuel 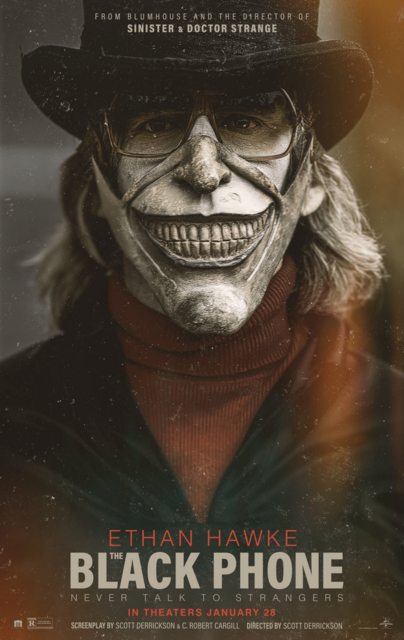 With director Everardo Gout's (Days of Grace) The Forever Purge opening in theaters this weekend, I recently had the chance to talk with producer Jason Blum about the sequel. During the wide-ranging interview, Blum talked about why he’ll never direct a movie, the way writer James DeMonaco is able to see the future, and how you can watch The Purge movies for entertainment or you can talk about the subtext the film deals with like racism and immigration.
Another project I’m both excited and curious about is Scott Derrickson’s The Black Phone, which will re-team Ethan Hawke with his Sinister director as well as co-writer C. Robert Cargill. While not much is known except it’s based on the novella The Black Phone by horror author Joe Hill, both Blum and Derrickson seem to think the film came out great. Blum told me The Black Phone:
“Is definitely one of the creepiest movies we’ve ever done. Scott thinks it is his best movie. I’m such a fan of Scott’s…I really like all of his movies. I loved Sinister but I will certainly say it is one of his best movies. Maybe the best movie he has ever made.”