According to legend, an ominous entity known as the Queen of Spades can be summoned by performing an ancient ritual. Those brave enough draw a door and a staircase on a mirror, in darkness, and say her name three times. What happens next you must experience to believe. Four teenagers decide to summon the Queen of Spades as a joke. But they could never imagine the horrors this innocent prank has condemned them and their loved ones to. The evil entity won’t stop until she gets their souls.

DREAD distributes the film in the US.
Filmed in Ottawa, Ontario, Canada.
This marks the feature film directorial debut of Patrick White.
Co-written by original writer/director Svyatoslav Podgaevskiy.
This is a remake of the 2015 Russian horror film, Queen of Spades: The Dark Rite, both of which are based on Russian folklore.
Dread Presents will release Queen of Spades to select theaters on June 11th, VOD on June 15th, and Blu-ray on June 29th, 2021.

Meet the Director & Cast of QUEEN OF SPADES in a Free Virtual Panel TODAY at 6 PM (PST)!
Dread Central 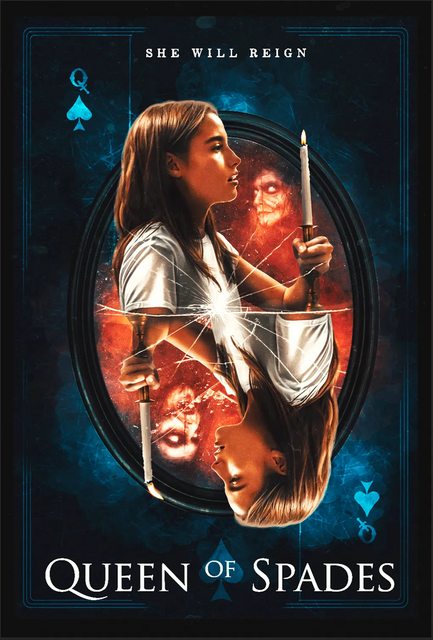