AKA Scream 5, AKA Untitled Scream Reboot

Twenty-five years after a streak of brutal murders shocked the quiet town of Woodsboro, a new killer has donned the Ghostface mask and begins targeting a group of teenagers to resurrect secrets from the town’s deadly past.

Filmed in Wilmington, North Carolina.
Scream 4's Marley Shelton is back as "Judy Hicks."
Neve Campbell returns as "Sidney Prescott."
Courteney Cox is officially back as "Gale Weathers." Additional casting is underway.
Additional casting is currently underway, with filming expected to begin later this year in Wilmington, N.C.. A theatrical release is aimed for sometime in 2021. (6/24/20)
David Arquette will officially return as Sheriff Dewey Riley. On his return he was quoted saying: "I am thrilled to be playing Dewey again and to reunite with my Scream family, old and new. Scream has been such a big part of my life, and for both the fans and myself, I look forward to honoring Wes Craven’s legacy." The studio has expressed interest in other "legacy cast" to return, specifically Neve Campbell, who has reportedly been in talks to return, but nothing has officially been set yet. (5/18/20)
Executive producer Kevin Williamson was quoted saying: "I’m excited to reteam with David and work with Jamie, Guy and Radio Silence on the next Scream. Their take on the movie is both original, inventive and honors Wes’ legacy in a wonderful way. Ready or Not was my favorite horror film of last year and I can’t wait to see what their amazing talents bring to the Scream universe. I’m thrilled to be a part of it." (5/18/20)
Scripted by James Vanderbilt (Murder Mystery, Zodiac, The Amazing Spider-Man) and Guy Busick (Ready or Not)
Neve Campbell had a recent YouTube interview where she revealed that she has been in talks with directors Matt Bettinelli-Olpin and Tyler Gillett about exploring ideas for the Sydney character to possibly return for the sequel. The project is still in early days, especially with Covid-19 putting a halt to a lot of productions. At the moment these are just ideas they're throwing around, so it's possible things may change over time. (5/6/20)
Filming was originally aimed to begin sometime in May 2020, but was delayed due to the covid-19 pandemic.
Matt Bettinelli-Olpin and Tyler Gillett are reportedly set to direct. The duo originally started out on YouTube and were known as "Radio Silence" until they moved onto film, where they recently helmed Ready or Not. (3/12/20)
Original franchise writer Kevin Williamson will executive produce this film.
This will mark the first Scream movie not helmed by the late Wes Craven.
This project is said to be in development with Spyglass Media Group, who is the studio behind the Hellraiser remake.
This is said to be a reboot/sequel, which brings back some of the legacy cast from the previous films.
Scream is expected to release in theaters on January 14, 2022.

TRAILER AND POSTER REVEALED FOR NEXT YEAR’S “SCREAM”
Rue Morgue

Directors Tease That the ‘Scream’ Trailer Is Only the Tip of a Very Deceptive, Scary Iceberg [Exclusive Interview]
Bloody Disgusting 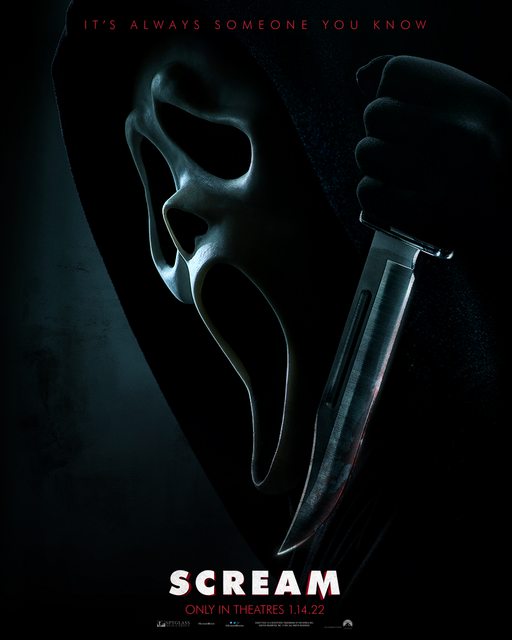 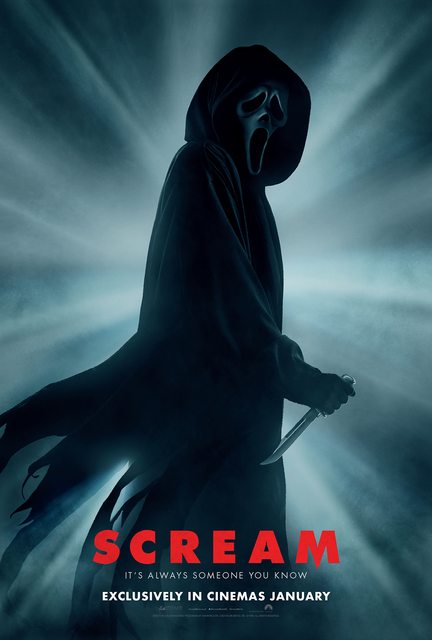 HelloSidney.com had the honor to meet Chad Villella, Matt Bettinelli-Olpin and Tyler Gillett. In this part, we remember the career and our favorite Wes Craven movies.


Jenna Ortega doesn't want to be the Tom Holland of the SCREAM franchise and give out spoilers.


Mellissa Barrera talks with her friend, Jonathan Montero, about SCREAM 5 - how she was cast, filming a movie with Covid, the directors and meeting her idol: Courteney Cox!


HelloSidney.com had the honor to meet Chad Villella, Matt Bettinelli-Olpin and Tyler Gillett. In this part, we talk the new movie per se.


HelloSidney.com had the honor to meet Chad Villella, Matt Bettinelli-Olpin and Tyler Gillett. In this part, we talk the new cast, the trio and how it was to make a movie during the pandemic.
Top

Scream 5 2022 is the reboot sequel to the Horror movie franchise started by Wes Craven. We finally have an update about when we will see The Scream 2022 Trailer along with details online about a new ability Ghostface will have in the movie to scare his victims. Scream 5 Update.


Scream 5 Trailer is officially coming tomorrow but for now Scream fans get our first look at the original cast Neve Campbell, Courtney Cox & David Arquette along with the new faces Ghostface will haunt. These new images show us a lot. Scream 2022 trailer will provide some context but until then I give you my reaction and breakdown of who is who. Along with my thoughts on the Scream 5 Poster.


Scream 5 Trailer reaction. The Scream 2022 trailer has officially released online. Before I give you my trailer breakdown here is my Trailer reaction to the new scream movie that is technically a reboot.


Scream Trailer Breakdown pointing out all the Easter eggs you might have missed along with my Scream 2022 trailer reaction. In this new Scream movie that is a small reboot for the horror movie franchise I explain why its not called Scream 5 and who the new characters are.
Top