A documentary filmmaker follows Margot (Emily Bader), as she heads to a secluded Amish community in the hopes of meeting and learning about her long-lost mother and extended family. Following a string of strange occurrences and discoveries, she soon realizes this community that welcomed them into their home might be hiding something sinister.

Producer Jason Blum recently revealed that the project is already finished and ready for Paramount+, but word is that it won't debut on the streaming service until towards the end of the year. He also goes on to detail how this reboot came about, saying: "Paramount wanted to continue Paranormal Activity, I probably would have left it alone. So they wanted to continue it, but I thought if they were gonna continue it, you gotta - it was tired, there was no way to continue the road that we’d been down. So I really encouraged all the creative people involved to think of something new. A lot of people who are going to go see the new Paranormal Activity were 3 years old when the first Paranormal Activity came out, so they don’t even know from those older movies. I thought if you were going to re-do it, you better really re-do it, not try and expand what we did all those years ago." (7/23/21)
Much like what HBO Max is doing, Paramount's new streaming service (Paramount+) will be premiering this movie on their service sometime in 2021.
William Eubank (The Signal, Underwater) is set to direct.
Much like the past films, this will be using the found footage format.
Previously had a March 19, 2021 theatrical release.
Writer Christopher Landon returns (Paranormal Activity 2-4, Marked Ones, Happy Death Day 2U, Freaky) to script and has revealed that a director has already been selected, but has to keep his name a secret for now. Landon was also quoted briefly saying "I think people are going to be really surprised by where we’re taking this thing." (11/16/20)
Producer Jason Blum gave a brief update on the status of the film recently, which is still in early development. Here's what he had to say: "We’re gonna do the movie. We’re developing the movie, but I don’t know where exactly the story’s going to land. We’re talking about different things. A hundred percent, we’re making a movie, we just haven’t gotten that far with the development. But I’ll tell you this. I would love to bring [ Katie Featherstone] back and she’s a great actress and she’s an old friend and I hope we get to bring her back." (6/23/20)
Aside from 2014's Paranormal Activity: The Marked Ones being a spinoff/quasi-prequel, Japan also had their own spinoff in 2010 called Paranormal Activity 2: Tokyo Night.
This is a reboot that has been described as an "unexpected retooling" of the franchise.
Paranormal Activity: Next of Kin premieres exclusively on Paramount+ October 29, 2021.


Jason Blum Reveals ‘Paranormal Activity 7’ Is Already Finished; Explains Why It Had to Be a Reboot
Collider

‘Paranormal Activity: Next of Kin’ Gets Release Date and Teaser Trailer
Dread Central

PARANORMAL ACTIVITY: NEXT OF KIN (2021)
MOVIES and MANIA

‘Paranormal Activity: Next Of Kin’ Trailer Takes Us To Amish Country
Horror Fuel

‘Paranormal Activity: Next of Kin’ Gallery Documents a Trip to an Amish Community
Bloody Disgusting 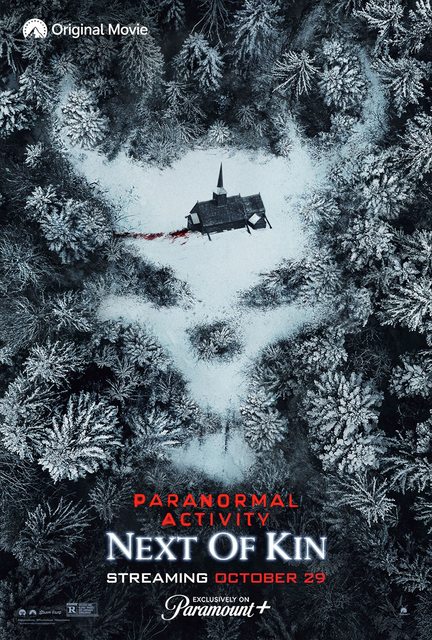