AKA The Little People

A couple escapes their urban nightmare to the tranquility of rural Ireland only to hear stories of mysterious beings who live in the gnarled, ancient wood at the foot of their new garden. As warned by their new neighbors, in Irish lore the Redcaps will come when called to help souls in dire need of rescue, but it's crucial to remember that there is always a dear price to pay for their aid.

Well Go USA distributes the film via a theatrical release, followed by a premiere on Shudder later in 2022, following the conclusion of the theatrical window.
Doris Pfardrescher, President and CEO at Well Go USA Entertainment was quoted saying: "We are thrilled to bring this new spin on an age-old Irish legend to North American horror fans, who may or may not know about the legend behind this mysterious group of faerie folk. The entire ensemble of stellar, tried-and-true cast and crew members have really outdone themselves bringing this story to life, and we believe audiences will be delighted by the result."
Previously known as The Little People.
One of the producers was quoted saying: "This is a one-of-a-kind page-turner of a script that does a brilliant job of marrying real scares with moments of pure entertainment. Jon has a brilliant vision for the film and a great team around him to deliver on such a thrilling premise."
Directed by Jon Wright (Grabbers, Robot Overlords).
Described as "Gremlins meets Straw Dogs."
The film reunites the Grabbers creature team; including prosthetics by Shaune Harrison who has worked on some of the world’s highest grossing blockbusters including the Harry Potter films, Star Wars: The Phantom Menace and Avengers: Age of Ultron along with with creature designs by Paul Catling (Maleficent, Thor, Fantastic Beasts) and long time Wright collaborator VFX supervisor Paddy Eason (28 Weeks Later, Harry Potter and the Prisoner of Azkaban).
This is a UK horror film.
Well Go USA released Unwelcome in U.S. theaters on March 17, 2022.
Unwelcome will premiere exclusively on Shudder later in 2022. 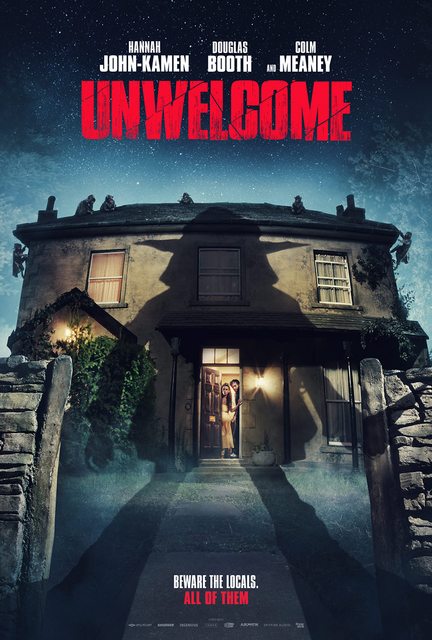