In 1979, a group of young filmmakers set out to make an adult film in rural Texas, but when their reclusive, elderly hosts catch them in the act, the cast finds themselves fighting for their lives.

EXCLUSIVE INTERVIEW: MIA GOTH AND BRITTANY SNOW GET INTO THE SKIN OF “X”
Rue Morgue

The FX Of X: Eyes Pop Out Of Their Damn Skulls (Just Make Sure They Hit The Mark)
FANGORIA 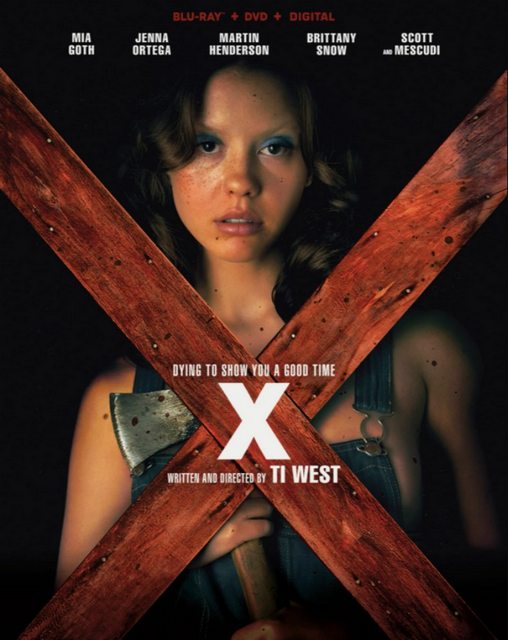 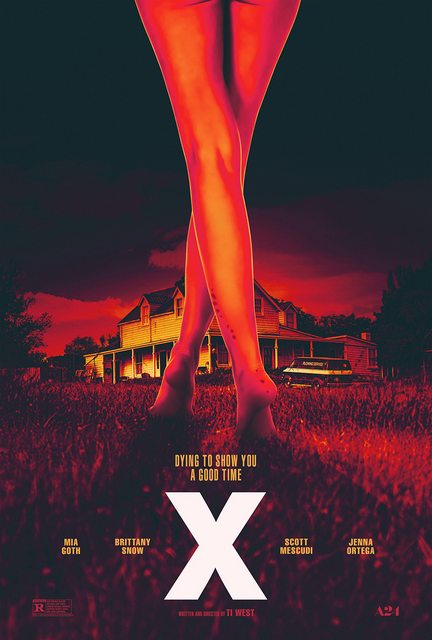 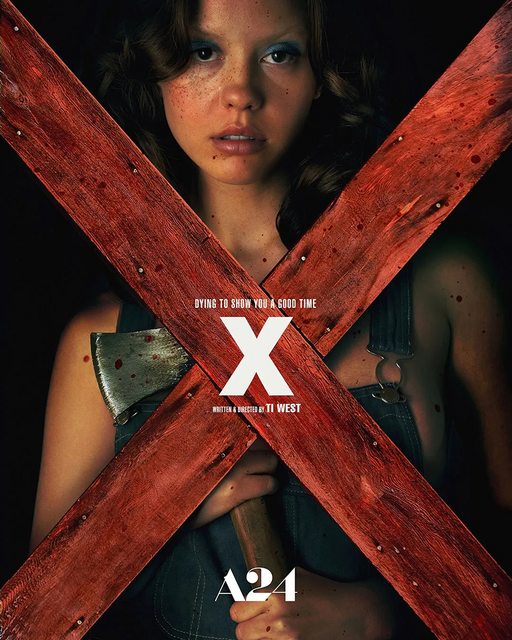 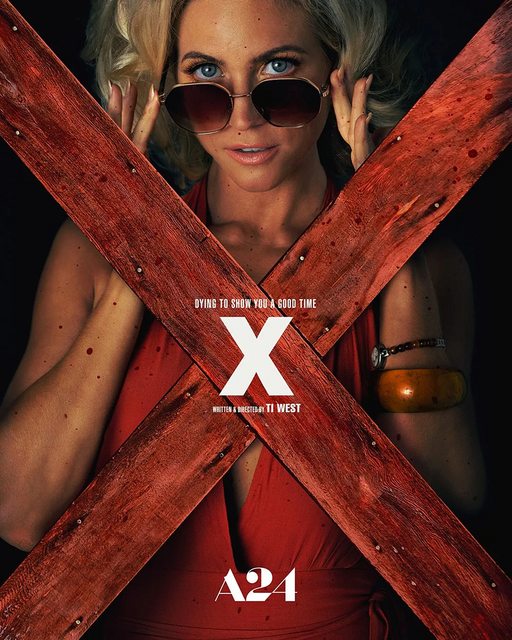 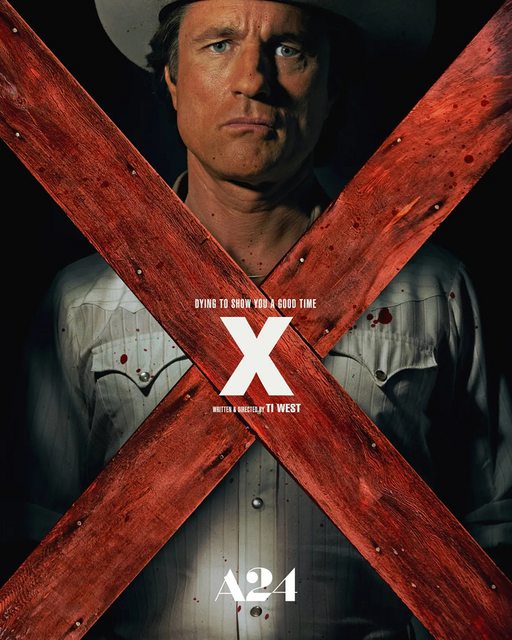 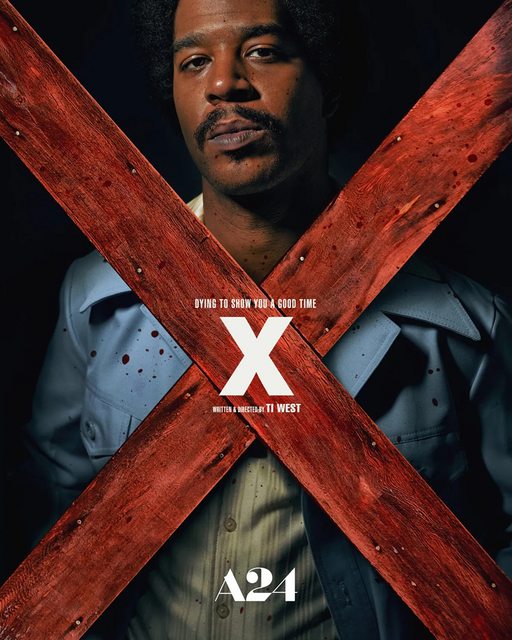 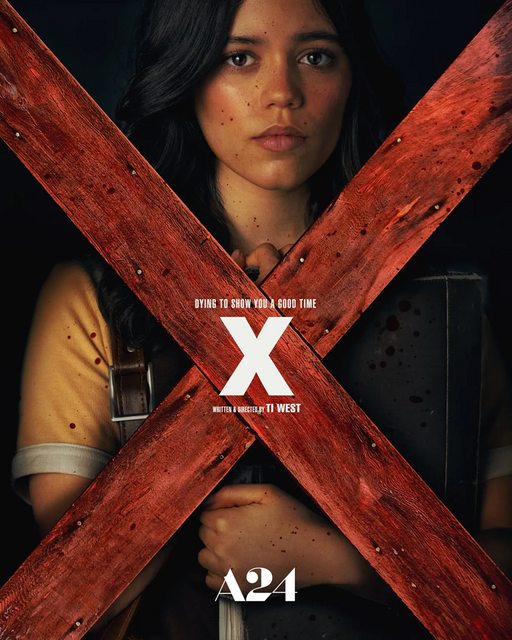 
Mia Goth, Brittany Snow, and Jenna Ortega have all had a good deal of experience working on genre films, but each faced their own unique challenges tackling Ti West’s latest, X.
Their characters are all part of a group of young filmmakers who head off to a remote farm in rural Texas in 1979 to shoot an adult film. Snow’s Bobby-Lynne is the seasoned pro brimming with confidence. Goth plays Maxine, an up-and-comer with big dreams. And then there’s Ortega’s Lorraine who reluctantly tags along because her boyfriend, RJ (Owen Campbell), is eager to put his film studies to use by directing the movie. Soon after arriving on location, the group’s elderly hosts discover what they’re really up to on their property, forcing their guests to fight for their lives.
With X now playing in theaters nationwide, I got the chance to chat with Goth, Snow, and Ortega about their experience making the film. Check out what they told us in this interview!


Brittany Snow stars in Ti West's X as Bobby-Lynne, a member of a group of filmmakers who head out to a remote farm in rural Texas to shoot an adult film. When their elderly hosts find out what they're really up to on their property, it kicks off a mighty violent killing spree.
With X now playing in theaters nationwide, Snow took the time to join us for an episode of Collider Ladies Night to recap her journey to this new film. She looked back on scoring her role in American Dreams and the magic of the Pitch Perfect franchise, discussed the importance of working with an intimacy coordinator on X, dug into a few X spoilers, and loads more!


[Editor's note: The following contains spoilers for X.]
► Show Spoiler
There’s lots to love about Ti West’s new movie X, but one of the best of the best is his choice to have Mia Goth play both Maxine and Pearl.
Maxine is part of a group of filmmakers who head out to an isolated farm in rural Texas to make an adult movie. That farm belongs to Pearl and her husband Howard (Stephen Ure). When they find out what their guests are really up to on their property, they’re not happy about it and things get violent. Pearl’s youth has come and gone, and she never got the opportunity to live the life of her dreams. Driven by regret and jealousy, Pearl and Howard pick off the filmmakers one by one.
X functions as a highly effective slasher movie, but the experience burrows its way into your brain to such an extreme extent courtesy of its thematic heft, something that is significantly bolstered by having Goth play both roles. Check out what West told us about his choice to have Goth pull double duty, why he decided to set the story in the 70s, how he views the ending, and so much more in this interview!


[Editor's note: The following contains spoilers for X.]
► Show Spoiler
There’s a lot of great set pieces in Ti West’s X, but one of the best of the bunch is undoubtedly the alligator payoff that kills Brittany Snow’s Bobby-Lynne.
The moment we see the alligator creeping close to Maxine (Mia Goth) while she takes a swim early on in the film, you just know it’s coming back to get someone. The alligator essentially operates as an extension of X’s brilliant opening. That first scene reveals the layout of the crime scene, clearly showing you where certain characters end up. The alligator build gives the viewer another piece of that puzzle, and after spending much of the film on edge, waiting to see who’s going to come face to face with the alligator, it happens.
While on Collider Ladies Night celebrating X’s SXSW premiere and theatrical release, Snow explained what it was like completing that stunt scene. Check out what she said in this Collider Ladies Night After Hours clip!


[Editor's note: The following contains spoilers for X.]
► Show Spoiler
As a big Ti West fan, I had mighty high hopes for X, but I didn’t expect the movie to weigh on my mind as heavily as it has courtesy of the questions it poses about aging and opportunities lost.
By the end of the movie, Pearl (Mia Goth) and Howard (Stephen Ure) have killed off almost every member of the adult film crew and lose their own lives in the process, leaving Maxine to drive off the property as the bloodbath’s sole survivor. Yes, one wants to live to see another day, but is this a happy ending for Maxine, or is it merely a fleeting win? Whether Maxine achieves her dreams or not, is she destined to follow this same cycle and wind up in a Pearl-like situation anyway?
My answers to those change depending on the day. Catch me in a more positive, hopeful mood and I might tell you that Maxine will live happily ever after. Clearly she’s got the ambition and if you pair that drive with this awful experience where she saw so many of her colleagues’ dreams cut brutally short, perhaps it’ll ensure that she’ll deeply appreciate whatever she does manage to achieve in the future.
But of course, one must consider the opposite. Maxine is a survivor with big dreams, but what happens as Maxine ages? Whether she’s successful or not, is she doomed to be consumed by jealousy as she ages and loses youthful qualities that are over-idolized?
While the ending of X and Maxine’s fate are open to interpretation, Brittany Snow did reveal she’s got an inkling of how things will likely pan out for Maxine on Collider Ladies Night. Catch her thoughts in this After Hours clip!
Top

X Movie review. X (2022) is the latest A24 horror movie directed by Ti West starring Jenna Ortega, Kid Cudi, Mia Goth, Martin Henderson, Scott Mescudi, and Brittany Snow. In the video I give you my review and honest reaction to this MESSED UP horror movie.


X is a film that was never on my radar but just became one of my favorite horror films in years.


The Maniacal Cinephile reviews Ti West’s new movie X (2022). Is it possible to make a good dirty movie? A group of actors sets out to make an adult film in rural Texas under the noses of their reclusive hosts, but when the elderly couple catches their young guests in the act, the cast finds themselves in a desperate fight for their lives. X stars Mia Goth, Jenna Ortega, Martin Henderson, Brittany Snow, Owen Campbell, Stephen Ure, and Scott Mescudi. Produced by A24. Written, directed and edited by Ti West.


Today I go down some rabbit holes about carnal desires, what is horror, and the Premium-Price VOD trend as I deliver this spoiler-free review of Ti West's "X" (2022).
Top