Several queer and trans campers join Owen Whistler (Kevin Bacon) for a week of programming intended to “help them find a new sense of freedom”. As the camp’s methods become increasingly more psychologically unsettling, the campers must work together to protect themselves. When a mysterious killer starts claiming victims, things get even more dangerous.

Will debut on the Peacock streaming service.
Previously known as Whistler Camp.
Writer/director John Logan was quoted saying: "They/Them has been germinating within me my whole life. I've loved horror movies as long as I can remember, I think because monsters represent 'the other' and as gay kid I felt a powerful sense of kinship with those characters who were different, outlawed, or forbidden. I wanted to make a movie that celebrates queerness, with characters that I never saw when I was growing up. When people walk away from the movie, I hope they're going to remember the incredible love that these kids have for each other and how that love needs to be protected and celebrated."
This marks John Logan's directorial debut, but he has worked for Hollywood as a successful writer for many years, having scripted such films as Any Given Sunday, Gladiator, The Last Samurai, The Aviator, Skyfall and Spectre just to name a few.
Described as a "slasher horror film set at an LGBTQIA+ conversion camp."
They/Them premiered on Peacock on August 5, 2022. 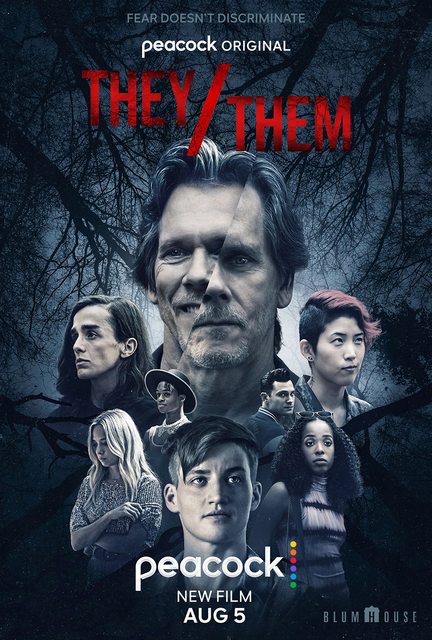 On the hunt for some must-know on-the-rise talent? Please let me introduce you to Austin Crute. Crute’s been working steadily since scoring his first screen credit via an appearance on Atlanta in 2016, but 2022 is looking to be an especially big year for him, beginning with the release of his newest feature, Tankhouse.
The film focuses on Tucker Charlemagne (Stephen Friedrich) and Sandrene St. Jean (Tara Holt), a thespian couple with big dreams and a deep passion for their craft who wind up getting kicked out of the New York avant-garde acting scene. They head back to Sandrene’s hometown of Fargo, North Dakota determined to start a theater company of their own. That’s where they meet Crute’s character, Jack, a rather reserved kid who starts tapping into his full potential through his work with Tucker, Sandrene, and the rest of their creative community.
With Tankhouse now available to watch in theaters and on VOD, Crute joined us for a chat to recap his journey in the industry thus far, which includes Olivia Wilde's Booksmart, the Netflix series Daybreak, John Logan's feature directorial debut They/Them, and more!


In honor of 'They/Them', Dread Central spoke with Kevin Bacon about his horror history, the first horror movie he ever saw, and more.

They/Them is Blumhouse's latest that puts a slasher spin on conversion therapy. Ironically, a movie that explores the struggle of being yourself has a complete lack of identity.