On a camping trip in Hawaii, three fine art students make a bet: who can tell the best supernatural story? According to the rules, each tale must have three items: a metaphysical piece, a character with green eyes, and a Japan location. The three young campers try to outwit each other, as they bring three famous Japanese ghost stories to the world, and things take an eerie turn as each tale takes them deeper into the Story Game.

Cinedigm Entertainment Group distributes in the US.
Filmed in Hawaii and Japan.
"The first tale is of high school girls bullying. It's only harmless classroom pranks until they bully the wrong girl who possesses supernatural powers and soon confront HANAKO, the primeval spirit who haunts the school’s halls. Next up, a story of obsession and a businessman who is seduced by an alluring woman he meets on his commuter train. When he finally catches up with her, she reveals her true self: KUCHISAKE-ONNA – the infamous slit-mouth monster. Last up, the classic myth of OIWA. A jealous wife obsessed with a young maid who drives her insane."
The feature film directorial debut of Jason K. Lau.
This is a horror anthology that "brings to life three legendary Japanese ghost stories. Each fable has been reimagined for the modern audience and crafted brilliantly into a single film."
Cinedigm released Story Game on VOD and streaming exclusively on Screambox on June 21, 2022. 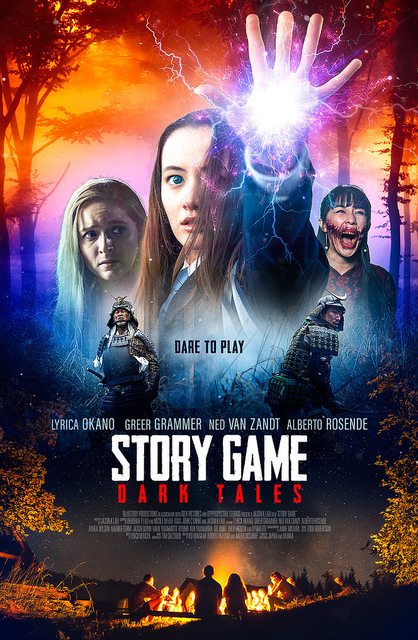