When twin brothers (Cameron and Nicholas Crovetti) arrive at their mother’s (Naomi Watts) country home to discover her face covered in bandages—the result, she explains, of recent cosmetic surgery—they immediately sense that something doesn’t add up. She sets strange new house rules, smokes in her bathroom, and secretly rips up a drawing they gave her—things their loving mother would never do. As her behavior grows increasingly bizarre and erratic, a horrifying thought takes root in the boys’ minds: The sinking suspicion that the woman beneath the gauze, who’s making their food and sleeping in the next room, isn’t their mother at all.

Amazon will distribute the film.
Filmed in New Jersey.
Director Matt Sobel was quoted saying: "My favorite films are those that invite the audience to step inside their protagonist’s journey. In our re-imagining of Goodnight Mommy, fear of abandonment — and the dreadful realization that those close to us may not be who they seem — create an immersive nightmare, with visceral sensations front and center."
Kyle Warren (Lethal Weapon series) scripts.
The original was the Austrian entry for best foreign language film at the Academy Awards.
This is a remake of the 2014 Austrian movie with the same name.
Goodnight Mommy premiered on Amazon Prime Video on September 16, 2022. 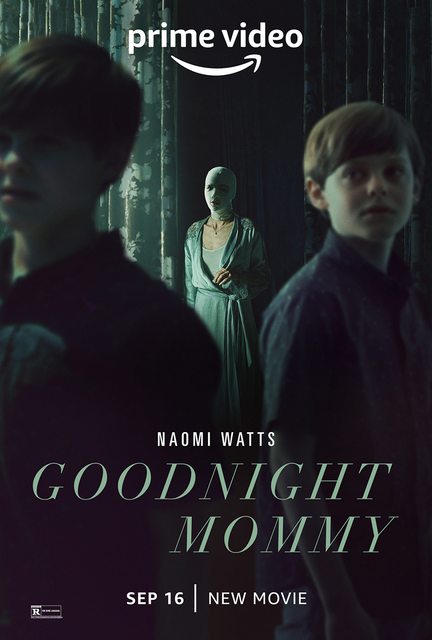 Goodnight Mommy is a remake of a 2014 Austrian horror film of the same name. In it, a pair of twins are dropped off for visitation with their mother, only to discover she has recently had cosmetic surgery, leaving her face completely wrapped in bandages. Her sons, Elias and Lukas, are a little nervous, and become more so when Mother becomes erratic and gives them new rules due to her "recovery." The boys begin to think that their mommy has been replaced by someone - or something - else.
Naomi Watts plays Mother, and twins Nicholas & Cameron Crovetti play Lukas and Elias. During our limited interview time, we spoke about their knowledge of the original film, and the boys explained why they were left in the dark about the film's final twist ending. Don't worry: there are no spoilers to be had in this interview!