Bones and All “is a story of first love between Maren, a young woman learning how to survive on the margins of society, and Lee, an intense and disenfranchised drifter; a liberating road odyssey of two young people coming into their own, searching for identity and chasing beauty in a perilous world that cannot abide who they are.”

MGM distributes in the US.
Filmed in the Ohio Tri-State area in spring 2021.
Directed by Luca Guadagnino (Suspiria remake).
This is said to be a cannibal love story.
Based on the book with the same name from writer Camille DeAngelis.
MGM released Bones and All in select theaters on November 18, 2022.
MGM released Bones and All in theaters everywhere on November 23, 2022.

Cannibals In Love: Luca Guadagnino And Taylor Russell On BONES AND ALL
FANGORIA 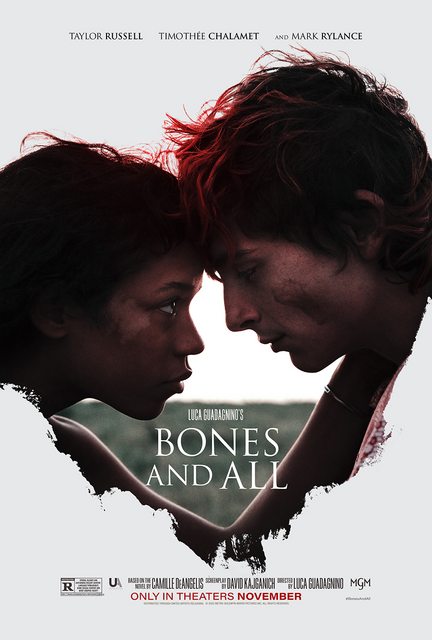 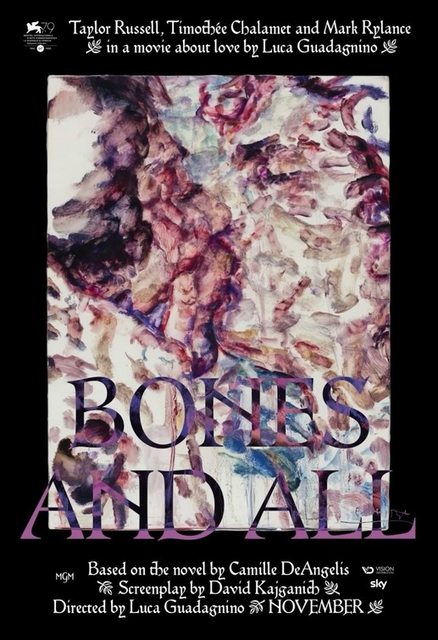 Taylor Russell is Maren in #BonesAndAll. Explore the complexity of her character in a new featurette and don’t miss the film only in theaters – Now Playing in New York and LA, Everywhere Wednesday.


Timothée Chalamet is Lee in #BonesAndAll. Learn more about his character in a new behind-the-scenes look with the cast and filmmakers. Don’t miss #BonesAndAll only in theaters – Now Playing in New York and LA, Everywhere Wednesday.


Get ready to fall in love with these outsiders in love. Watch a new Behind-the-scenes look at #BonesAndAll and don’t miss film in theaters everywhere tonight!

What a night! The cast and creative team of #BonesAndAll hit the red carpet at the Venice Film Festival.


A day to remember... take a look back at the Taylor Russell and Timothée Chalamet, the stars of #BonesAndAll, hitting the red carpet with director Luca Guadagnino at the film's UK premiere at the London Film Festival.


Audiences in NY & LA ate up #BonesAndAll at special screenings hosted from coast to coast.
Top