Adela (Ana de la Reguera, Cowboys & Aliens) and her husband Juan (Tenoch Huerta, Days of Grace) live in Texas, where Juan is working as a ranch hand for the wealthy Tucker family. Juan impresses the Tucker patriarch, Caleb (Will Patton, Halloween), but that fuels the jealous anger of Caleb’s son, Dylan (Josh Lucas, Ford v Ferrari). On the morning after The Purge, a masked gang of killers attacks the Tucker family—including Dylan’s wife (Cassidy Freeman, HBO’s The Righteous Gemstones), and his sister (Leven Rambin, The Hunger Games), forcing both families to band together and fight back as the country spirals into chaos and the United States begins to disintegrate around them.

Previously had a July 10th, 2020 theatrical release, but it has since been pulled from the schedule due to the uncertainty of the current state of theatrical releases right now because of the covid-19 pandemic. (5/15/20)
This marks the feature film directorial debut of Everardo Gout, who until now has only worked on TV, directing episodes for shows like Banshee, Luke Cage and Mars.
Franchise creator James DeMonaco returns to script.
Writer James DeMonaco was quoted saying the following about the next movie: "I have [the next installment] in my head. I think I’m going to write it. I think it’s a great way to end it all. We want to end it all, I think, in this one, and I’m very excited. When I came up with the idea and pitched it to everybody, they seemed psyched, and I think it will be a really cool ending, how we take this one home."
There is also a television series set in The Purge universe, which saw a second season in 2019 before it was ultimately cancelled.
This is the fifth and possibly final installment in The Purge franchise.
Originally slated for a 2020 theatrical release, then bumped to July 9th, 2021, but now The Forever Purge has moved up to July 2, 2021. 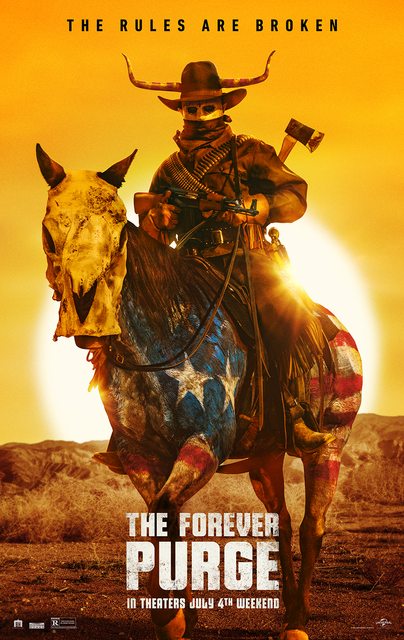 The 2013 action-horror hit The Purge spawned three follow-up flicks and a TV series in just over five years, and now, the final film in the series is hitting theaters in July 2021. A direct sequel to 2016's The Purge: Election Year, The Forever Purge promises to plunge a whole new set of people into the franchise's typical stew of mayhem, violence, and anarchy. Writer James DeMonaco is reportedly aiming to clarify the moral of the story with this final edition of the franchise, which looks even more chaotic than its predecessors. Here are the Forever Purge details you need to know before it drops.