Once the booming home of pharmaceutical giant Umbrella Corporation, Raccoon City is now a dying Midwestern town. The company’s exodus left the city a wasteland…with great evil brewing below the surface. When that evil is unleashed, the townspeople are forever.. changed.. and a small group of survivors must work together to uncover the truth behind Umbrella and make it through the night.

Actor Donal Logue joins the cast and will play "Chief Irons."
In terms of the story, writer/director Johannes Roberts was quoted saying: "With this movie, I really wanted to go back to the original first two games and re-create the terrifying visceral experience I had when I first played them whilst at the same time telling a grounded human story about a small dying American town that feels both relatable and relevant to today’s audiences." Producer Robert Kulzer added... "After a dozen games, six live-action movies and hundreds of pages of fan fiction, we felt compelled to return to the year 1998, to explore the secrets hidden in the walls of the Spenser Mansion and Raccoon City." (10/6/20)
Kaya Scodelario as "Claire Redfield."
Hannah John-Kamen (Ant-Man and the Wasp) as "Jill Valentine."
Robbie Amell (Upload) as "Chris Redfield."
Tom Hopper (The Umbrella Academy) as "Albert Wesker."
Avan Jogia (Zombieland: Double Tap) as "Leon S. Kennedy."
Neal McDonough (Yellowstone) plays "William Birkin."
Writer/director Johannes Roberts had a recent interview where he offered an update on the project and revealed his take on the remake, saying: "We are in active development of that at the moment. I pitched them a take, and they really loved it. So, we are just gearing up on that as we speak, really. I’m in the office all the time there. So, yeah, it’s great. It’s gonna be super scary. It’s super, super scary. And it’s just getting back to the roots of the game. I think, at the moment, I’m not really allowed to say much more than that. But it’s gonna be a lot of fun." (8/18/19)
It was initially announced that James Wan (The Conjuring 2) would produce the film via his Atomic Monster banner, but that proved to be false.
Written/directed by Johannes Roberts (The Other Side of the Door, 47 Meters Down, The Strangers: Prey at Night).
It's said that the film will feature an entirely new cast.
Don't expect to see the return of director Paul W.S. Anderson or actress Milla Jovovich as Alice, especially since the Alice character was created specifically for the movies.
Apparently this will be the first of six planned movies.
Based on the Capcom video game, the live-action series launched in 2002 with Paul W.S. Anderson directing and the franchise would go on to earn $1.2 billion worldwide to date, making it Europe’s most successful independent horror-genre movie franchise in history and the highest-grossing film series based on a video game.
This is said to be a "reboot" to the Resident Evil live-action movie franchise that features a new "origin story adaptation with faithful ties to Capcom’s classic survival horror games."
Resident Evil: Welcome to Raccoon City was originally set to be released in theaters on September 3, 2021.
Sony released Resident Evil: Welcome to Raccoon City in theaters on November 24, 2021.

THE CAST OF “RESIDENT EVIL: WELCOME TO RACCOON CITY” ON FAN CULTURE, VIDEO GAMES, AND WHAT SCARES THEM
Rue Morgue 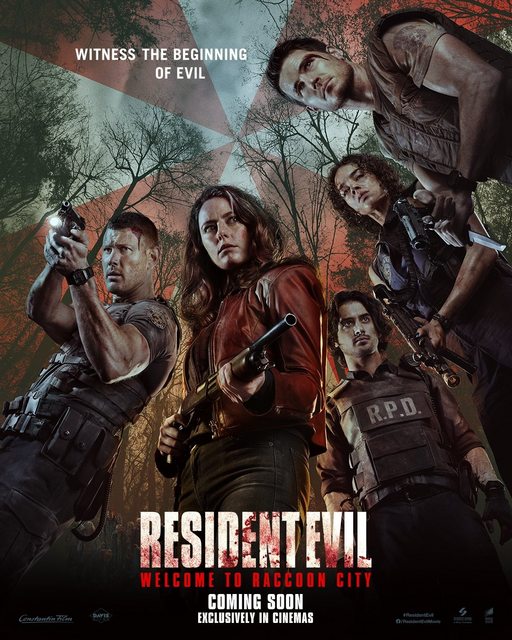 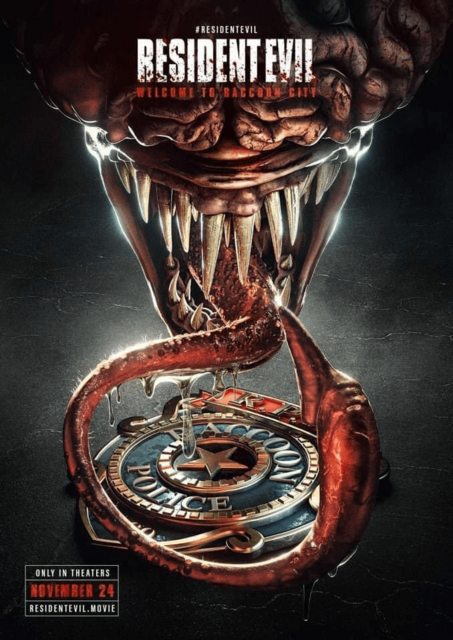 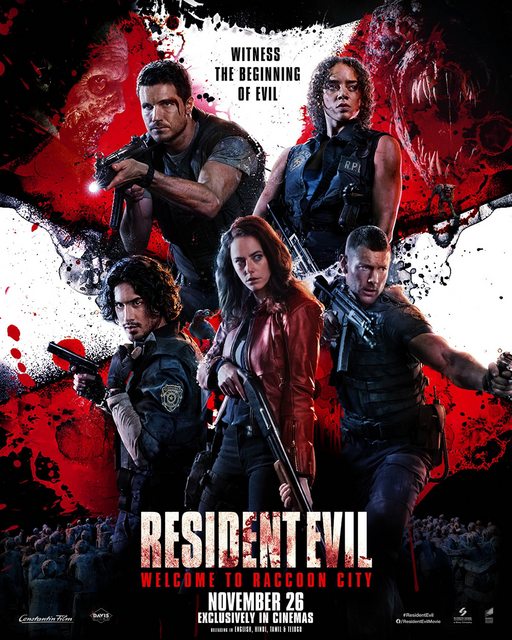 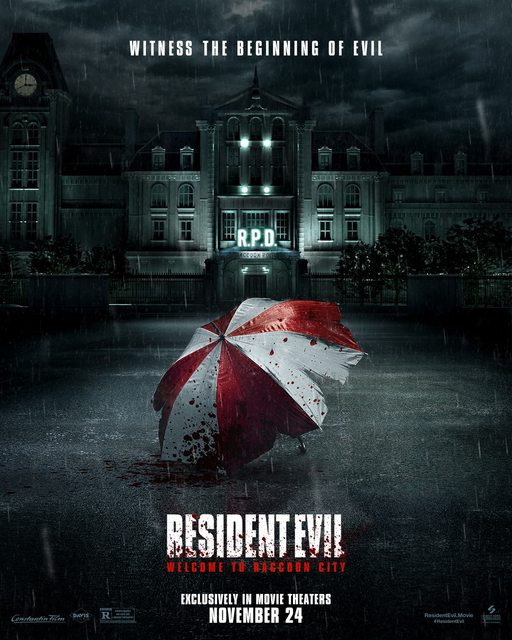 
Hear what makes #ResidentEvil: #WelcomeToRaccoonCity writer/director, Johannes Roberts, so passionate about adapting the games for the big screen.


Allow Kaya Scodelario to introduce you to her character, Claire Redfield.


Tom Hopper breaks down why Albert Wesker is not your stereotypical villain in #ResidentEvil: #WelcomeToRaccoonCity.


#ResidentEvil: #WelcomeToRaccoonCity is filled with tons of Easter eggs from the games. How many can you count in this video?

Johannes Roberts explains how he brought the creatures of Raccoon City, including fan favorite Lisa Trevor, to life.

Working closely with game developers at Capcom, #ResidentEvil: #WelcomeToRaccoonCity is packed with Easter Eggs from the games.

Resident Evil Reboot titled Resident Evil Welcome To Raccoon City revealed its first look at some of the video game characters for the live action movie. Leon Kennedy, Claire Redfield, Chris Redfield, Albert Wesker, Richard Aiken & Jill Valentine. Along with first look at Lisa Trevor the zombie. Some fans don't love the look but I think it looks fine and could be a great movie.

while diving into the details of bringing these games to life in #ResidentEvil #WelcomeToRaccoonCity.

The world of "Resident Evil" is heading back to the big screen with a live-action movie that sure looks like the most faithful adaptation of Capcom's beloved video game series yet. Sony surprised fans by dropping the trailer for "Resident Evil: Welcome to Raccoon City" in the middle of the week, and it's full of intriguing references to the series, particularly "Resident Evil 2." Set to be released November 24, 2021, the newest "Resident Evil" flick is a reboot with no connection to the six other films starring Milla Jovovich. Think you caught all of the fun nods to the long-running Japanese horror video game series? Here are some small details only true fans noticed in the "Resident Evil: Welcome To Raccoon City" trailer.


Audiences are once again heading back into the world of Resident Evil, but this time they'll be making a stop in Raccoon City along the way. After six films starring Milla Jovovich and directed by Paul W.S. Anderson, a new, more faithful adaptation is on the way to fans starring a talented crew of stars playing characters straight from the games. While the previous Resident Evil franchise branched into widescreen spectacle and action showcases, this new take seems to be a return to the spirit of the original games. Wondering what you need to know before watching? Just watch this before you see Resident Evil: Welcome to Raccoon City.


"Resident Evil: Welcome to Raccoon City" meshes the first several iconic games of the video game franchise into a horror-filled adaptation that skews closely to the original games, while also offering a thrilling new story that will keep die-hards guessing. From set design to character costumes to recreated scenes to tricky hidden details, there's a whole lot for fans of the game to love in "Resident Evil: Raccoon City." Did you catch all the hidden Easter eggs in "Resident Evil: Raccoon City"? You might want to check again. Here's a round-up of some of the best secrets even Umbrella couldn't hide.
Top

Resident Evil Welcome To Raccoon City Review based on the video game franchise. Resident Evil reboot tells the accurate story of the first two Resident Evil video games. Here I give you my honest reaction and full movie breakdown spoiler free of what I thought.


Resident Evil: Welcome to Raccoon City is a straight love letter to fans of the original games. Does the movie hold up beyond all the fan service?