Set in the Comanche Nation 300 years ago, “Prey” is the story of a young woman, Naru, a fierce and highly skilled warrior. She has been raised in the shadow of some of the most legendary hunters who roam the Great Plains, so when danger threatens her camp, she sets out to protect her people. The prey she stalks, and ultimately confronts, turns out to be a highly evolved alien predator with a technically advanced arsenal, resulting in a vicious and terrifying showdown between the two adversaries.

According to director Dan Trachtenberg, this isn't a prequel movie, saying: "in my mind, this is not a prequel movie, this isn’t, ‘Let’s tell the origin of the Predator.’ This is really something that’s set prior to the original Predator movie. And the Predator creature in this one, this is its first time travelling to Earth." (7/18/22)
20th Century Studios president Steve Asbell had a recent interview where he talks about working with Hulu and confirms that the film takes place in 1719. Here's what he had to say: "In order to meet the volume that we are looking at — which is, by 2023, 10-plus movies just for streaming — it’s going to be a combination of originals in those genres (comedy, thriller, young adult, horror). And coolest of all for fans, we get to find bold takes on beloved Fox properties. You can take big creative swings — which you’ll see with Prey, which we’ll launch this summer. A Predator movie set in the Great Plains in 1719 by Dan Trachtenberg. That’s what this allows us to do." (3/7/22)
Now titled Prey, the movie will debut sometime next summer on Hulu. (11/12/21)
Producers John Davis and John Fox had a recent interview where they revealed various details on the film, specifically that director Dan Trachtenberg is reportedly "three-quarters of the way through production" and it's said to be an origin story that focuses on Predator's first visit to Earth. They go on to add... "It goes back to what made the original Predator movie work. It's the ingenuity of a human being who won't give up, who's able to observe and interpret, basically being able to beat a stronger, more powerful, well-armed force. It actually has more akin to The Revenant than it does any film in the Predator canon. You'll know what I mean once you see it." They go on to reveal that they're not sure if it'll be PG-13 or Rated R since it all depends on "how it's cut" during editing and won't reveal if the rumor of the film going to Hulu is true or not. (7/28/21)
The rumored synopsis is as follows: "Kee is a Comanche woman who goes against gender norms and traditions to become a warrior. Many years ago – in a time before any Europeans had ever encroached on their lands – the Comanche people had a well defined society and gender norms. Kee is very close to her younger brother, Taabe, who is being groomed as a leader. As capable as any young man in the tribe, Kee has always been a teacher and source of inspiration for Taabe. In the Comanche way – she is Patsi – the elder sister that has helped to shape him. Kee is a truth teller and has insight that others do not. A tomboy, she wants to prove herself in the masculine world of the Comanche. When danger threatens them all – Kee sets out to prove that she is as capable as any young warrior."
Previously known as "Skulls."
Directed by Dan Trachtenberg (10 Cloverfield Lane).
Written by Patrick Aison (producer of Wayward Pines, Tom Clancy's Jack Ryan, Treadstone).
This is the fifth installment in the Predator series and is believed to be a prequel of sorts that focuses on warriors in a Comanche tribe that come across a Predator.
Prey premiered on Hulu on August 5, 2022.

Could ‘Prey’ Be the Beginning and the End For the ‘Predator’ Franchise?
Dread Central

INTO THE VOID: An Ode To The Predator’s Hot New Look
FANGORIA 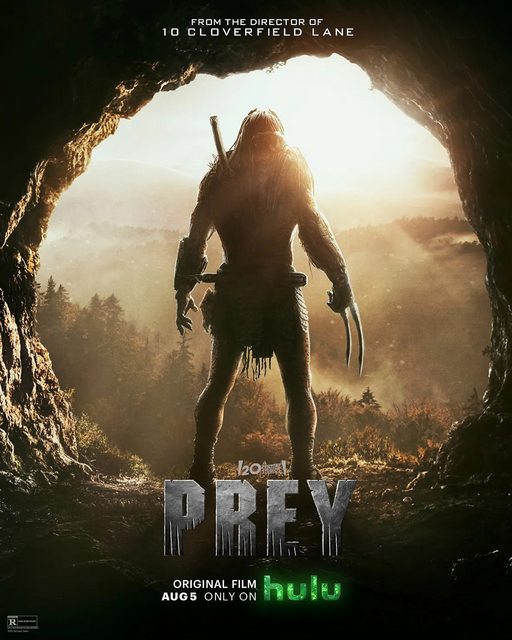 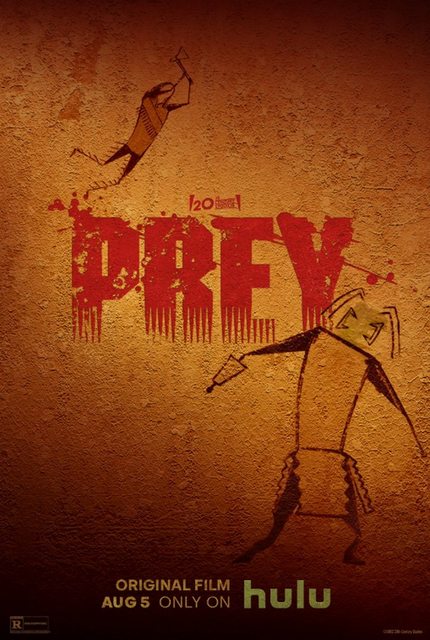 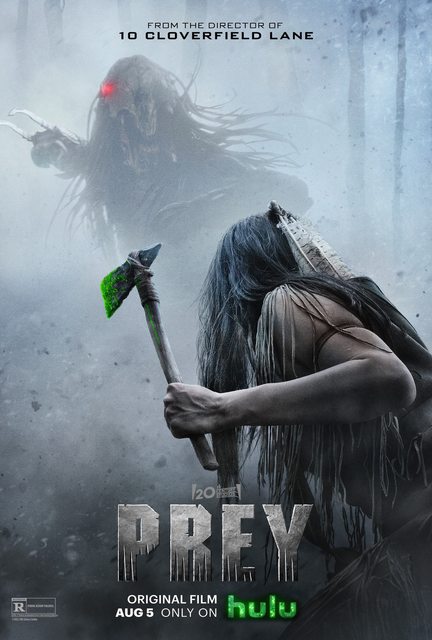 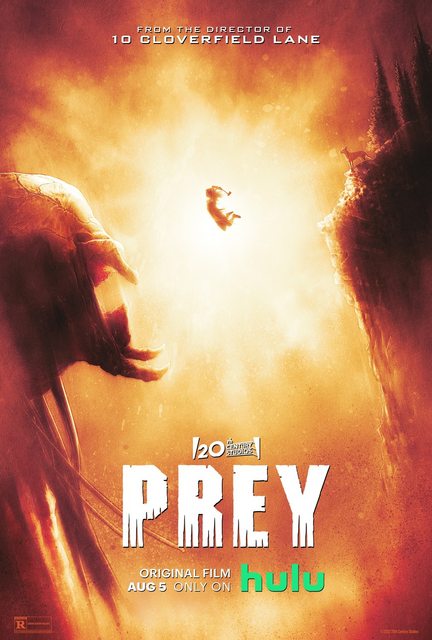 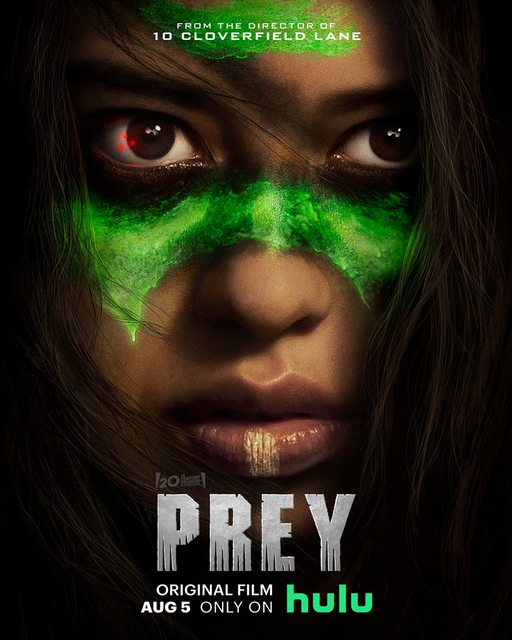 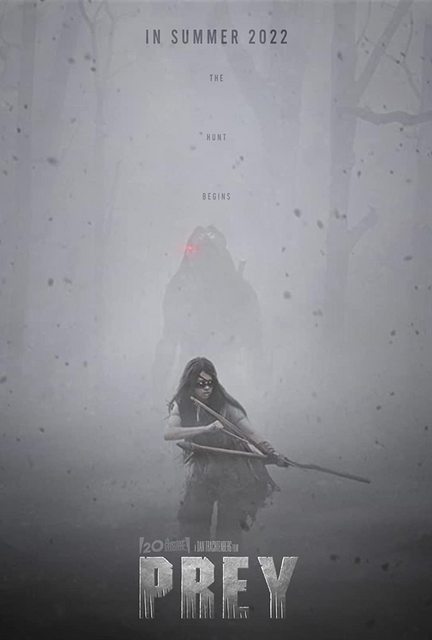 Set in the Comanche Nation 300 years ago, “Prey” is the story of a young woman, Naru, a fierce and highly skilled warrior. She has been raised in the shadow of some of the most legendary hunters who roam the Great Plains, so when danger threatens her camp, she sets out to protect her people. The prey she stalks, and ultimately confronts, turns out to be a highly evolved alien predator with a technically advanced arsenal, resulting in a vicious and terrifying showdown between the two adversaries.
“Prey” is directed by Dan Trachtenberg, written by Patrick Aison (“Jack Ryan,” “Treadstone”), and produced by John Davis (“Jungle Cruise,” “The Predator”), Jhane Myers (“Monsters of God”), and Marty Ewing (“It: Chapter Two”), with Lawrence Gordon (“Watchmen”), Ben Rosenblatt (“Snowpiercer”), James E. Thomas, John C. Thomas and Marc Toberoff (“Fantasy Island”) serving as executive producers.

TRULY BLESSED! I got to have a Q&A with the director Dan Trachtenberg (The Boys & 10 Cloverfield Lane), the stars Amber Midthunder & Dakota Beavers, plus the Producer for the new Predator film! Talked action, Comanche nation, performances, music, & SO MUCH MORE!!

Prey Movie Review. The Predator prequel movie funded by Disney and premiering on Hulu is almost out and here I give you my honest reaction and spoiler free movie review. I think this Predator movie will please a lot of fans.


The newest film in the Predator franchise takes a smaller and more-focused approach. Prey is a movie that fans of the original are going to love!


Thank you for watching this discussion of Prey here at Rotted Reviews!


The origin story of the Predator in the world of the Comanche Nation 300 years ago. Naru, a skilled female warrior, fights to protect her tribe against one of the first highly-evolved Predators to land on Earth.


Maniacal Cinephile movie review for the new Predator prequel PREY. A skilled Comanche warrior protects her tribe from a highly evolved alien predator that hunts humans for sport, fighting against wilderness, dangerous colonizers and this mysterious creature to keep her people safe.

The "Predator" franchise was broken. So how can one movie turn everything around? "Prey" found a way.


Home turf means a lot when it's predator vs. prey. Hunting for answers after finishing the movie? Here's how it all went down.
Warning: spoilers ahead for "Prey."


Gear inspired by "God of War." A surprising connection to "Predator 2." Here's how "Prey" is rewarding fans on the hunt for Easter eggs.


"Prey" is proving to be a hit for critics and fans alike, but how do Indigenous film reviewers feel about this Comanche woman versus space monster flick?


This doggy diva nearly ruined the hunt for the perfect shot. But what '80s movie inspired the pup's inclusion in "Prey?"


This predator should've brought the plasma cannon. And is that mask more style than substance? These are the biggest unanswered questions in Prey.


The Predator gets a makeover — and gets outfoxed by a dog. "Prey" is more than just "Predator 5." Here's how the prequel kept the franchise fresh.


From a grizzly blood bath to flying French body parts, "Prey" offers up some of the "Predator" franchise's most gruesome kills. Spoilers ahead.
Top
Post Reply
4 posts • Page 1 of 1