As the human species adapts to a synthetic environment, the body undergoes new transformations and mutations. With his partner Caprice (Léa Seydoux), Saul Tenser (Viggo Mortensen), celebrity performance artist, publicly showcases the metamorphosis of his organs in avant-garde performances. Timlin (Kristen Stewart), an investigator from the National Organ Registry, obsessively tracks their movements, which is when a mysterious group is revealed… Their mission – to use Saul’s notoriety to shed light on the next phase of human evolution.

NEON distributes in the US.
Filmed in Greece.
It's said that the script for this film is "largely adapted from an earlier project Cronenberg had written, called "Painkillers," which was in-development in 2002 with Nicolas Cage attached."
This marks David Cronenberg's return to body horror and is reportedly his first original script since 1999's eXistenZ.
NEON released Crimes of the Future in theaters on June 3, 2022.
Crimes of the Future arrived on Digital outlets on June 21, 2022. Crimes of the Future is being offered as a Premium VOD option to rent for $19.99 or buy for $24.99.
Decal Releasing and NEON releases Crimes of the Future on Blu-ray™ and DVD on August 9, 2022.

EXCLUSIVE INTERVIEW: “CRIMES OF THE FUTURE” STARS VIGGO MORTENSEN AND LÉA SEYDOUX ON THEIR DAYS WITH CRONENBERG
Rue Morgue 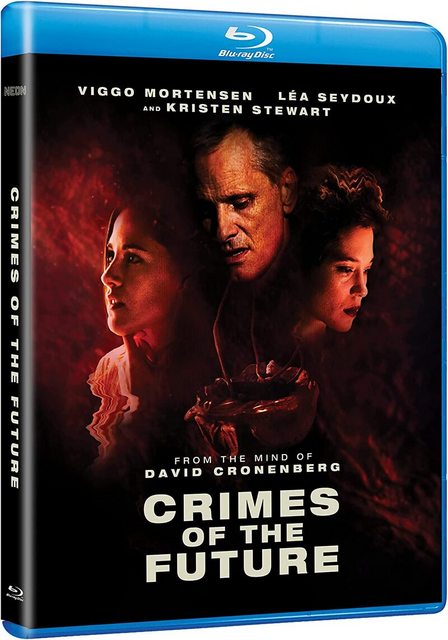 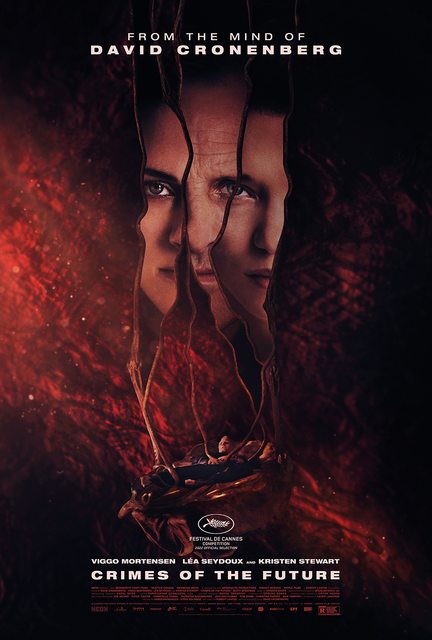 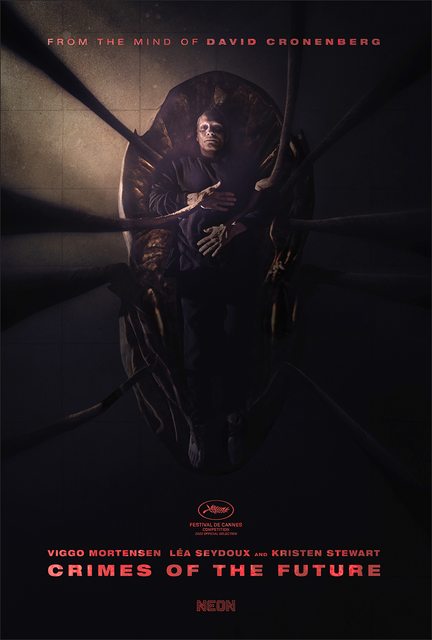 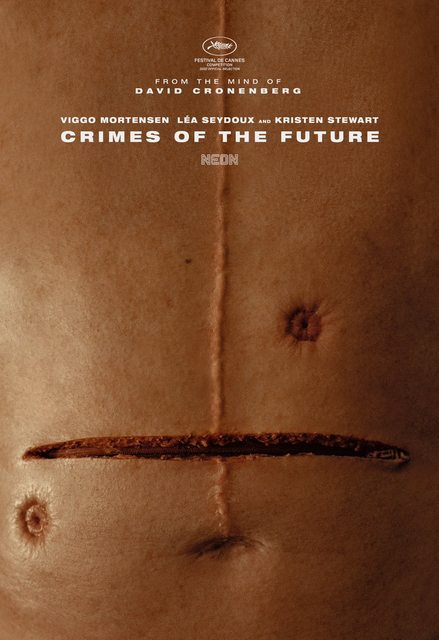 We spoke with Alex Anger and Monica Pavez, the co-founders of Black Spot FX, who most recently did all the SFX work for 'Crimes of the Future'!


David Cronenberg is a king of big screen body horror and his newest release, Crimes of the Future, lets him use that skill set to the fullest — and then some.
The story takes place in the not-so-distant future when the body has adapted to the synthetic environment mankind created. Many have “accelerated evolution syndrome” like Viggo Mortensen’s Saul Tenser whose body continuously grows new organs. While these evolutionary changes are not widely accepted, there is a community that embraces them in the form of art. In Saul’s case, his partner Caprice (Léa Seydoux) removes these new organs surgically in front of a live crowd as performance art.
Check out this Crimes of the Future interview to hear all about Cronenberg and Scott Speedman's experience making the film, and to get Cronenberg's take on the future of movie theaters.


There’s loads to admire in David Cronenberg’s Crimes of the Future, but the relationship between Viggo Mortensen’s Saul Tenser and Léa Seydoux’s Caprice is the beating heart of the movie.
The story takes place in the not-so-distant future when the human body is adapting to its synthetic surroundings. Saul is one of many experiencing “accelerated evolution syndrome” with his body frequently growing new organs. With the help of specialized equipment, Saul is able to accomplish everyday tasks like eating and sleeping, but for him, it isn’t just about managing the condition. He embraces it as performance art by having his partner, Seydoux’s Caprice, remove these new organs surgically in front of a live audience.
Check out what Mortensen and Seydoux had to say about bringing Saul and Caprice to screen in this Crimes of the Future interview!
Top