An upstanding pastor uncovers a dark and twisted underworld as he searches for answers surrounding his daughter’s brutal murder. A high-octane original soundtrack and cameos from some of the biggest names in rock music set the tone as this horror-thriller reveals a game of revenge played using a new set of rules.

CineLife Entertainment distributes in the US and Canada. Bernadette McCabe, executive VP of event cinema and exhibitor relations at CineLife Entertainment, added: "We are excited to bring this critically-acclaimed thriller to cinemas. This highly-anticipated release will give horror film fans the chance to experience the adrenalized, gore-soaked crowd pleaser that film festival audiences across the globe have been screaming about."
The film had a successful festival tour that saw premieres at London’s Arrow Video FrightFest and a U.S. premiere at Screamfest, where it was the opening film. The pic ultimately screened at more than 25 festivals worldwide.
Filmed in New Jersey and Nevada.
Papa Roach front man Jacoby Shaddix makes his acting debut with this movie.
The film features an original soundtrack and cameos from prominent names in rock music, including Mötley Crüe’s Tommy Lee, Five Finger Death Punch’s Ivan Moody, Zoltan Bathory, and Chris Kael, Papa Roach, Jaya of The Hu, Spencer Charnas of Ice Nine Kills, Eva Under Fire’s Amanda Lyberg, Matt Brandyberry, Danny Case, Lance Dowdle, and Matt Madiro of From Ashes to New, Cory Marks, and Dan Murphy and Miles Franco of All Good Things.
The Retaliators will be released in the U.S. and Canada by CineLife Entertainment, and via Trafalgar Releasing for the rest of the world.
The Retaliators arrived in theaters worldwide for one night only on September 14, 2022.

THE RETALIATORS (2021)
MOVIES and MANIA

INTERVIEW: MICHAEL LOMBARDI ON THE HEAVY HORROR OF “THE RETALIATORS”
Rue Morgue 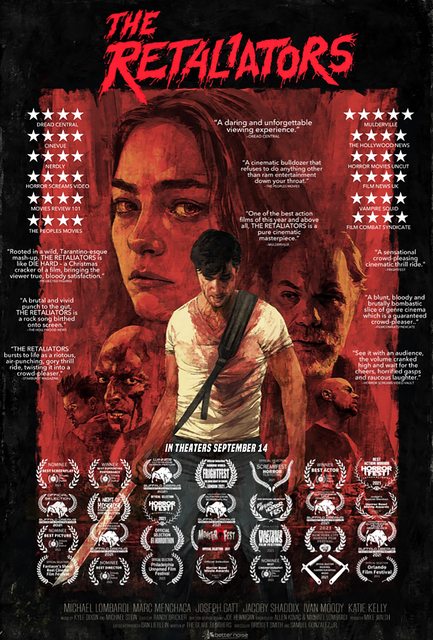 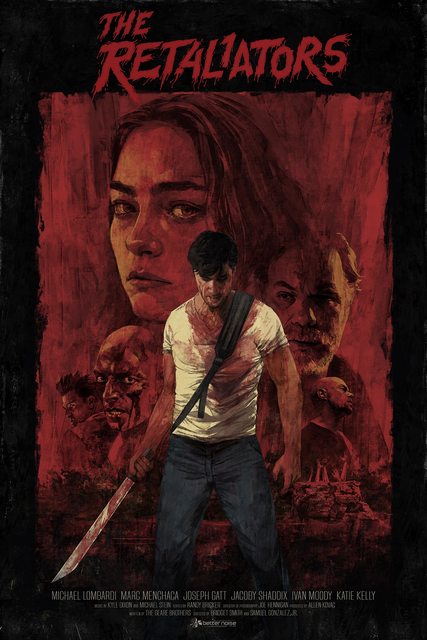 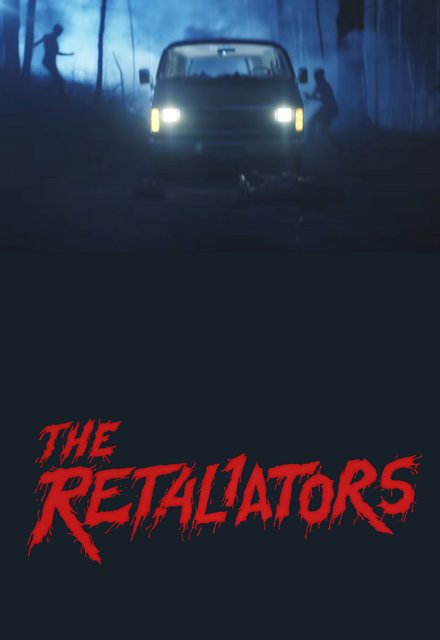 Check out #FiveFingerDeathPunch in The Retaliators, in theaters one night only, 9/14/2022!

“The Retaliators Theme Song (21 Bullets)”, co-written by Nikki Sixx and James Michael of Sixx: A.M., features Mötley Crüe, Asking Alexandria, Ice Nine Kills, From Ashes To New and is featured on The Retaliators Original Motion Picture Soundtrack due out September 16, 2022.

An upstanding pastor uncovers a dark and twisted underworld as he searches for answers surrounding his daughter's brutal murder. A high-octane original soundtrack and cameos from some of the biggest names in rock music set the tone as this horror-thriller reveals a game of revenge played using a new set of rules.
Better Noise Films (The Dirt, Sno Babies) have announced the World Premiere of their latest production, The Retaliators, at London's Arrow Video FrightFest 2021. The rock and roll gorefest follows a broken pastor as unimaginable grief leads him to depths of depravity he never imagined. The Retaliators will world premiere at FrightFest on Monday, 30 August.
Michael Lombardi ("Rescue Me"), Marc Menchaca ("Ozark"), and Joseph Gatt ("Game of Thrones") headline the cast alongside Jacoby Shaddix, front man of Papa Roach, making his acting debut. The Retaliators features cameos and music by Mötley Crüe’s Tommy Lee, Five Finger Death Punch, Papa Roach, The Hu, Ice Nine Kills, Escape The Fate and many more, anchored by an original score from Emmy-winning composers Kyle Dixon and Michael Stein ("Stranger Things").