Aisha [Anna Diop] is an undocumented nanny working for a privileged couple in New York City. As she prepares for the arrival of the son she left behind in West Africa, a violent presence invades her reality, threatening the American Dream she is painstakingly piecing together.

Blumhouse and Prime Video distribute in the US. Apparently "Jason Blum saw the movie and instantly fell for it so wanted to include it as part of the company’s Amazon deal. There is also a theatrical commitment." Blum was quoted saying: "We’re proud to have writer/director Nikyatu Jusu’s Nanny as part of our slate for Amazon. It’s a gem of a horror film that combines impressive filmmaking and powerful storytelling, and is worthy of the Grand Jury Prize it was awarded at Sundance."
Filmed in New York City.
This marks the feature film directorial debut of Nikyatu Jusu.
The script for this film was part of 2020's "The Black List," which is a list of the year's best unproduced scripts.
Prime Video released Nanny in theaters on November 23, 2022.
Nanny premieres on Amazon Prime Video on December 16, 2022. 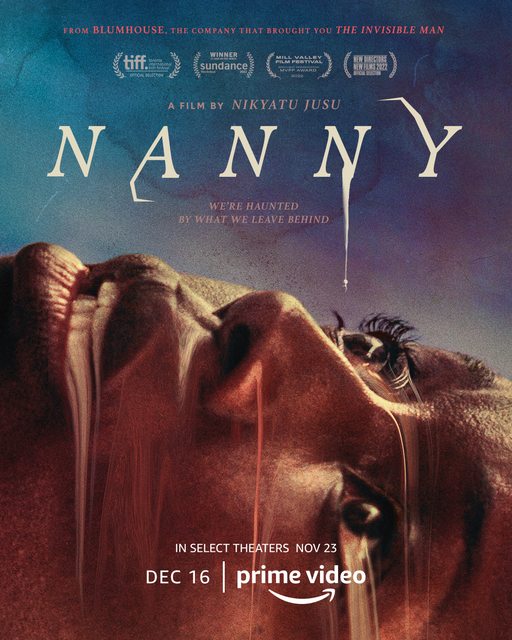 Looking for a genre director on the rise in a big way? Let me direct you to Nanny helmer, Nikyatu Jusu. Not only is her feature directorial debut getting showered in praise on the festival circuit, but she’s also got her next production lined up with Jordan Peele’s Monkeypaw and Universal.
Nanny stars Anna Diop as Aisha, a woman from Senegal working as a nanny in New York City. Initially, Aisha sees hope in her new position caring for the daughter of Michelle Monaghan’s type-A working mom, especially because that gig will help her earn the money necessary to bring her own son, Lamine, over to the states. However, soon after starting the job, Aisha finds her world crumbling as she’s haunted by a violent presence that threatens to destroy her American dream.
With Nanny celebrating its international premiere at the 2022 Toronto International Film Festival, Jusu, Diop, Monaghan, and Sinqua Walls who plays Malik, a building doorman Aisha develops a relationship with, all swung by the Collider Supper Suite and Media Studio at Marbl to discuss their experience making the film which is due out on Prime Video on December 16, 2022.


Nanny star, Anna Diop, tells MoviesandShakers how she drew from her own mother's experience as an immigrant who was a Nanny for 24 years to play this role. She also talks about the supernatural and horror elements of the film and cultural superstitions from her country, Senegal.


Dread Central spoke with 'Nanny' director Nikyatu Jusu about her feature film debut, the importance of storytelling, and her experience with the world of academia.
Top
Post Reply
2 posts • Page 1 of 1